Rin-Rin wrote: > Interviews with an author. > Interview with Milli Gilbert

Hey, I hope you had a lovely and inspirational day yesterday. It being Valentine’s day and all. I didn’t, I was at work. XD …and the “visitors” in my basement is dwindling too. :/ Want to join the romance authors that I have left? XD Anyway, to carry on with what you’re here for.

Today why don’t we go for some tips and treats? Let’s ask Milli Gilbert who already has a couple of books out…

Any tips on what to do and not to do when writing?

Several things. One, write the stories you want to write. Don’t let anyone tell you that you can’t write that. Because yes, you can.
Two, join some kind of writers community, whether it be face to face or online, they’re an incredible resource for knowledge and idea bouncing and networking and critiquing/beta reading.
Three, when you get advice, don’t apply everything everyone says or you won’t have a story anymore. Sit on the advice a bit before even deciding if you want to follow it – only apply the advice/suggestions that will make your story better in the way you want to tell it. Stay true to your vision – it’s your story.
And last but not least, it’s okay to use adverbs. Like all the other tools in your toolbox, the key is to use them in moderation. If it’s the right word to use, then use it. I have yet to come across an “always” or “never” rule that is true. Everything – including coffee and chocolate – in moderation.

What would you say are the main advantages and disadvantages of self-publishing vs traditionally published?

There are certainly pros and cons for both. With self-publishing, it’s easier to get published because of places like Amazon and Smashwords. You don’t have a publisher’s guidelines to follow, only your own, which means you can write the story the way it was meant to be told instead of falling into the same old formula as everyone else.
At the same time, traditional publishers have better physical distribution processes. Otherwise, you’re pretty well stuck with Amazon’s CreateSpace for physical book sales, which isn’t bad, but it’s pretty much Amazon exclusive, unless someone buys a bunch and then sells them for a mark-up. Supposedly, traditionally publishing means you have their marketing resources, but I’ve also heard a lot lately that they’re making their authors do more and more of their own marketing. (If I have to do all the marketing myself, then why the hell am I not getting a larger portion of the profits?) Also access to their editors and such. But not the freedom to write your own thing the way you want to.

How much research do you do?

I save that for when I want to cry. I hate research, so I do as little as possible. Unless it’s fun research like I had to do for Perfect Ten, when I needed to be able to describe a bull-riding accident. I watched a lot of PBR. Or “inspiration research” for sex scenes. I don’t have a problem with that. But when it comes to having my MCs playing a game of chess? Shoot me now.

How important is it for your work to go through critiques and beta readers?

Extremely. Those critiques help point out issues with the plot – like gaping plot holes, inconsistencies (like horses clomping down a cobbled road, but they get the carriage stuck in the muddy lane?) or characters out of character, or bad phrasing, redundancies, and any other issue you can think of. They point out the flaws before the story is published. Much easier to fix it now and make it the best you can now, instead of going back to it to fix the entire plot. I know, for me, anyway, that when I proof read, especially, I read what I meant to say, not what I actually have written. I need people to find my typos. It helps keep the cost of an editor down if the piece is as polished as possible before it gets that far.

Do your romance novels feature sex and if so, where do you lie on the spectrum between fade-to-black and explicit?

To answer the first part of the question: it depends on the characters. I have some couples who refuse to even let me listen at the door, but I also have characters who are like, “oh, you missed that? Let me rewind that for you so you can get every last detail.” 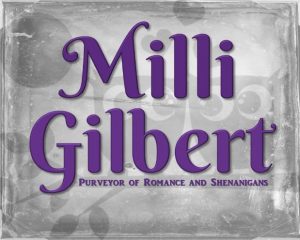 Milli Gilbert is a stay-at-home mom who loves to play with words almost as much as she loves to play with her kids. All of her stories involve romance, and maybe a little bit of mystery. Milli loves to write about cowboys and shifters. And smut. Don’t forget the smut. And can usually be found trying to find interesting ways to combine them. She has several short stories published, and hopes to have her first full length novel out in late Summer 2017. She just took off after one of her couples to follow them around for a few months – but don’t worry, she’ll be back. Or, you can find her on her blog, Hairballs of Genius, and follow her on Twitter, Her books are available on Amazon.