Rin-Rin wrote: > Interviews with an author. > Interview with Sherry Terry

And thus there are only two more months left. A year sure does go by fast. I feel like I just started with this, my poor basement is starting to get empty of vi-vi…eh, screw it (pun intended). My basement is almost empty of victims. T^T
Anyway, let’s start with Sherry Terry’s interview. *picks up a whip to herd Sherry out of the basement*

What was the hardest thing about writing your latest romance book?

Starting the story in the right year. The Norman invasion of England in 1066 wasn’t the right year for my characters or the setting. In order to keep all the things I wanted like a big castle and no language barrier between the two main characters, I changed it to 1147. Fixed the problems I had with believability.

When you develop characters do you already know who they are before you begin writing or do you let them develop as you go?

I pretty much know who they are before I begin writing. What their goals are, their inner conflicts, some obstacles to stand in the way of their love. I do profile sheets for my characters, but for everything else I’m a panster not a planner.

How are you publishing your writing and why?

Do you aim for a set amount of words/pages per day?

No. I more aim for at least opening a story and staring at it. I have a problem with procrastinating, so I spend some time every morning and evening for marketing. I also love to promote other writers I’ve read when they have something coming out. I do try to write something every day. When I’m in the zone, I can crank out a few thousand words a day, but when my muse is on a break – zilch. I don’t force things by setting a specific amount per day/week/month.

It was a short story for English class in about fifth grade. My story was about a little boy who was sacrificed in a volcano. I don’t remember the prompt, all I really remember is he felt honored to dive into the volcano for his people. Got an A on it with a note from the teacher saying it was a good story. I drew a picture and everything. 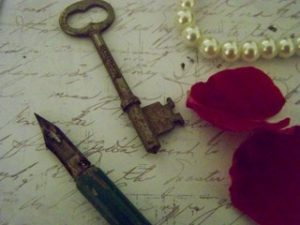 Sherry Terry lives on Red Bull and sarcasm in a small town in Texas with her hermaphroditic cat named, Hermy. As a single mother, she put herself through college and worked as a Radiologic Technologist for almost twenty years before she gave it all up to be a bum. In her Champagne wishes and caviar dreams, she spends all of her time writing the next greatest romance novel to hit the market. Her blog is dedicated to helping aspiring writers with how-to articles and awesome research links.
Please feel free to friend her on Facebook
Follow her on Twitter
Take a look at the inspiration for her stories on Pinterest
And visit her blog, verysherryterry
Publication: Voyeur in the Mist