Rin-Rin wrote: > Interviews with an author. > Interview with Julia Ward

Howdy, yet another month has passed by in a cold blur. Though, spring is showing signs of coming. She better well hurry on. :/

Anyway, today we’re jumping right into another of them monthly interviews. Today’s interview is with another one of vict- …I mean esteemed guests, Julia Ward.

What was the hardest thing about writing your latest book?

Ugh. For me the hardest part is feeling like no one’s going to read it. It’s something I think all of us struggle with as human beings, not just writers. Everyone’s going to see me as a fraud. So the most difficult part of writing anything, for me, is just making myself write it and get it out there even though part of me insists that no one is going to read it let alone like it.

Do you proofread/edit all your own books or do you get someone to do that for you?

I do the first few run-throughs, then I bug a writer friend like my interviewer, to run through and catch the things I’ve gone blind to.

Do you think that giving books away free works and in that case, why?

I’ve been struggling with this question. Maybe not free exactly. Maybe a coupon code to make it free if you sign up for email or are a part of a group. Give it away as a perk for something. I have a book I got as a freebie on Amazon when it was first released – Actually, I have a few. I haven’t read any of them. Free is frequently equated with no value. So give it away totally free? Maybe on the release date. But after that, there needs to be value somewhere. I’m hoping that made a little bit of sense.

What inspires you to get out of bed each day?

Oh, man. I’ve had some issues with depression in the past so this question is harder on me than some of the others. Back then it was the fact that the kids needed me. That’s what got me out of bed those days. Unless I felt I was just not fit for human interaction. That happened some times. But now, I’m grateful that it’s nothing like that. Now there are days where it’s just knowing that if I stay in bed I’ll sleep too much and feel like crap. :p Other days it’s an idea for a story or sometimes I just really need a cup of coffee. Ugh, that sounds so bad, doesn’t it? Oh, well. Every morning I have an email from a friend of mine. That helps get me started too. 😀

The first story I remember (there were others before this that I don’t remember) was 6 th grade. Our teacher gave us two lists of words to make a title and then we had to write a story. I picked the words Nuclear and Bunny, thus Nuclear Bunny was created. I loved the freedom of being as weird as I could be back then, unfettered by the rules of being a grown-up. I’m getting there again. Sometimes to the amusement and perhaps concern of friends and family. 😉 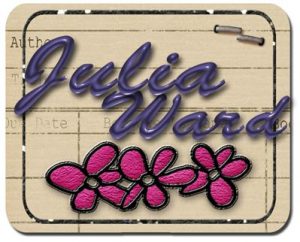 Julia Ward is a Pacific Northwest native. During childhood she delighted in running with the family’s pack of dogs through the neighboring forest, pretending so many adventures. More stories filled her head over the years with only a few making it to paper. Now, with kids grown with kids of their own, she looks forward to sharing her stories with others and hopes they’ll bring a little fun or love into someone’s life.

A variety of disparate jobs during her years has given her some interesting experiences and knowledge leading to the formation of some quirky characters.

Currently, her primary genre leans toward the romantic side but she also has works in progress that wander into the sci-fi as well as the paranormal realms.

Julia looks forward to getting to know her readers and hopes they enjoy her work.

You can find a little more about her at About.Me/JuliaWardAuthor
And some of her rambles (and perhaps a snippet or two) at halffastwriter.wordpress.com